Happy October (we can only hope) 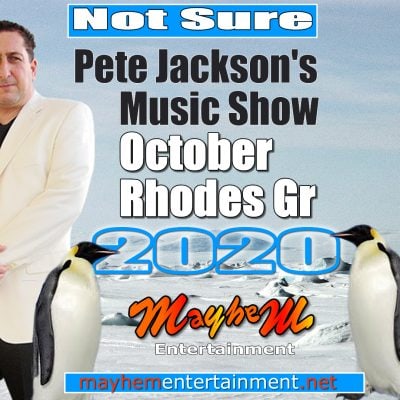 Well what a croc of a year for everyone, everywhere. I see Bo Jo has decided now that Covid-19 is not only nocturnal but also chrono specific, as well as dissipated quicker in the system by singing & dancing. Wow, would love to see the scientific research notes that lead to that conclusion. For those of you that got a chance to come to Greece, specially Rhodes. I hope you had a great time. I had a great time (long may it continue) in one particular venue, The Paleos Apartments. Giannis and the staff kept me in employment there this season despite all the obvious restrictions. Sadly my other venues were forced to close or run on a limited basis and without the normal amount of tourists. However I will be back with them hopefully next season. People have been asking me for details of my next show:
It will be at “somewhere” from “not sure until don’t know” On the something of October 2020 .. see you there
(This advert was bought to you in all it’s clarity by Boris Johnson Advertising)

I was asked a lot this year why I stopped working in a certain area of the island, For legal reasons lets call it “Falitacky”.  It was mainly down to one venue that really pissed me off to the degree I said to the owner ” Are you f****ing mental?”. Again for legal reasons, I can’t mention the venue so let’s call it “Sniffanys”. The problems and bad atmosphere seamed to be caused by a person & partner that did not work there, yet had some kind of omnipotent complex that destroyed the work of any public relations or entertainment and good will. Many customers complained about the behavior of the people involved but this was ignored by the owner. I have too much showmanship, professionalism to even entertain in a place like that so I left. Apparently the drama continues. I have never felt the need to wax lyrical about how shit a place can be until now. Which shows you how bad it is. It seamed to me that the problems were exacerbated by the movement and consumption of, again for legal reasons, lets use another word; “propane”. I am sure at some point like the proverbial “fart in a wetsuit” (annoying and unwanted with nowhere else to go) these people will soon be gone in the same way the venue will be.

I don’t want to end this post on a negative typing about some morons. So if you are out in Rhodes this month I may see you. I might see you if you are fortunate enough to have booked into the Paleos. You may also catch some Minioke with mini at various venues around the island still or if you have booked her for a wedding (then you are guaranteed a good time). Until then have a good, week, month, year, Christmas, New Year, Birthday 🙂